Posters and Advertisements for Print and Web. 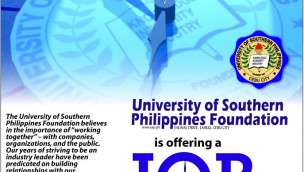 Released as a classified ads entry, this advertisement joins the job rush.

Advertisement with a touch of art nouveau.

Poster with the big question mark and seeking the answer from its audience: Who will be the next?

The first USP's Finest poster announcing University of Southern Philippines' search for the best students of the year 2002.